Delivering optimal nutritional care for all throughout the cancer journey What will it take? 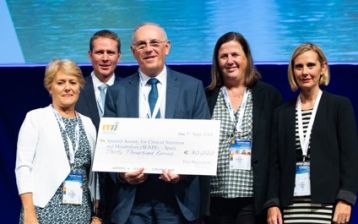 A few weeks ago, the Spanish Society for Clinical Nutrition and Metabolism (SENPE) was awarded the MNI Grant 2018. The Medical Nutrition International Industry (MNI) found of high relevance the work done during the last years in Spain with Alianza mánutridos that, in this occasion, presented a project of developing a cost-economy tool to assist autonomous administrations, with health competencies, to tackle disease-related-malnutrition (DRM) in Spain.

Alianza másnutridos was born in 2011 from the union of SENPE and Abbott Foundation to highlight the situation of the DRM in Spain. Since then, it has been expanding to reach the 17 organizations among scientific societies, patients and professional associations that currently form it.

Since its creation, it has focused its efforts on raising awareness of the importance of including malnutrition in national and regional health strategies, in order to improve the situation of malnourished patients. In 2011, the Alliance presented the Consensus on the Multidisciplinary Approach to Malnutrition in Spain at the Ministry of Health, Social Services and Equality, signed by the representatives of more than 35,000 health professionals represented in 22 Societies and Scientific Associations, the Nutrition Foundation and the Forum of the Patient.

Several legislative initiatives have been promoted during these years, with particular reference to the non-law proposition approved unanimously by the Spanish Congress of Deputies, requesting the introduction of measures to improve the approach to disease-related-malnutrition in Spain. This is one of the most important milestones achieved by the Alliance másnutridos, counting with the support of all political groups in the chamber.

This non-law proposition, a resulting text prepared jointly by all parliamentary groups, reaffirms the importance of addressing malnutrition in the quality of care of the patients and how it positively affects their recovery; as well as the cost savings that this implies to the National Health System.

Alianza másnutridos has also been working in the development of initiatives in the regional parliaments of the Autonomous Communities of Spain, as well as in the implementation projects of nutritional screening in different hospitals.  Deserves particular attention the Draft Law for Healthy Living that is being developed in Andalucía, for which some political groups have included amendments on disease-related-malnutrition for debate. This could be the first time that DRM is included in a possible draft of Law.

Nowadays, and with the support with the MNI Grant, Alianza másnutridos is working in the already mentioned tool to assist autonomous administrations to tackle the disease. The development of this tool can be competencies in this fight, providing more information to the administrations of the cost-effectiveness that could suppose the introduction of screening measures in hospitals and health.

Community-based approach to DRM in people with polymorbidity